View source
watch 02:53
GTA: The Criminal Enterprises - The Loop
Do you like this video?
Play Sound
Overview
Gallery

“Tangent corporate headquarters have been targeted by a team of ruthless saboteurs. Their goal is to destroy critical infrastructure: the server room or the executive building. SWAT has been dispatched to handle the situation.”

Breach (de_breach) is a community-made bomb defusal map added on the July 31, 2019 update. It has been added in competitive in Scrimmage mode. The map takes place in winter, since some snow is seen on the ground outdoors. It has been removed from the game on March 31, 2020, along with Studio.

This scenario pits the Professionals against the FBI as they attack Tangent corporate headquarters with the intent to destroy critical infrastructure: the server room or the executive building. 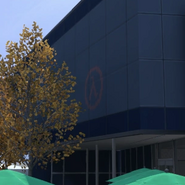