After development of Counter-Strike: Condition Zero was handed over to Turtle Rock Studios and their new iteration of the game was announced, it was initially believed that the work previously done by Ritual Entertainment would be scrapped.[1] Shortly after the announcement that Turtle Rock had taken over, it was announced that work done by Ritual wouldn't be scrapped completely, but that the 12 best of the 18 finished missions would be released separately with the title Deleted Scenes to allow players to experience a different approach for the single-player design.[2][3] While Ritual Entertainment and many fans were delighted to hear that the work of Ritual would in fact be released, Ritual Entertainment was not particularly happy with the decision to name their work Deleted Scenes.[4]

When Ritual Entertainment was finished with their contribution toward the Condition Zero project, they had already mostly finished the missions, though they were never given the chance to properly polish them.[5] This meant that Valve Software had to carry out the final polishing (mainly fool proofing of mission sequences) of the missions.[6] Valve also made some changes to the interface, including changing the main menu background to a blueish color and redoing the world map. There were also plans to add support for the newly added detail textures to the game,[7] but for unknown reasons this was dropped. Deleted Scenes was eventually released on March 23, 2004 as part of Counter-Strike: Condition Zero.

On June 17, 2004 Jess Cliffe announced that the six missions that had been removed from the original release would get added to the game in future updates.[8] Eventually, the three first extra missions would get released on June 28, 2004 and the three remaining on July 14, 2004.[9] During the editing of Pipe Dream, Valve decided to cut the final part of the mission instead of editing it to make it fool proof.[6]

The gameplay in Deleted Scenes is very different to that of a traditional Counter-Strike multiplayer game and has more similarities to the gameplay of e.g. Half-Life. This is a linear shooter where missions have to be completed in a set sequence. Also, the story of the maps is told in forms of cut scenes that occur at the start or the end of the mission. Additional scripted sequences that occur mid-mission provided further narrative.

Most missions consist of several maps that the player will have to play through in order to finish the mission. There are occasional puzzles which may involve breaking an obstacle or finding a way around an obstacle. Often of these puzzles involve the use of the new mission specific equipment. Some of the missions also climax in the form of a boss fight, which may involve destroying or defending some form of an aircraft or vehicle.

In this game there is no concept of money. Instead the player starts missions with specific weapons and equipment. Additional weapons and ammunition may be found from the maps themselves. Unlike many traditional linear shooters, defeated enemies do not drop ammunition or weapons. There are also both health and Kevlar restoration options available in Deleted Scenes. Moreover, the power of players' Kevlar armor is boosted, better protecting players from many projectiles and bullets.

While team mates or squad members are occasionally present, most of the game is played as a lone wolf without the presence of team mates. Also on the occasion that team mates are present, their effectiveness will prove quite limited.

Valve Software cut down the original 18 mission story line to a shorter 12 mission sequence. Each mission has to be completed sequentially as completing one missions unlocks the next mission. The training mission is an exception to this; it can be started either via the world map or the new game window and completing it isn't necessary to unlock further missions.

When the 6 extra missions were released through updates, they were not made part of the mission sequence. These missions are unlocked by default and can be started from the world map. 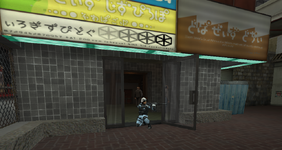 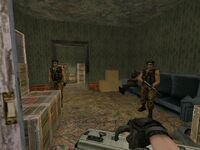 Turn of the Crank, an American urban themed mission 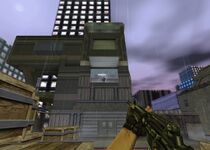 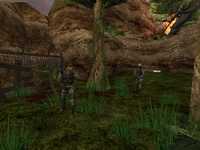 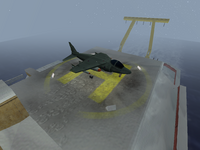 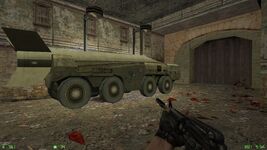 Several weapons that originated from earlier iterations of Condition Zero appear in Deleted Scenes, including the M72 LAW Light Anti-Armor Weapon, and the M60. Some are limited to the AI terrorists, such as the machete and Rogue Entertainment's controversial suicide belt. The game also introduces new mission specific equipment including the blowtorch, radio, fiber optic camera and RC bombs.

In addition to exclusive new weapons, all weapons from the original Counter-Strike also make an appearance. Some weapons were completely reanimated. This includes the Maverick M4A1 Carbine, Clarion 5.56 and IDF Defender. On the other hand, the Krieg 552 uses earlier animations.

Some weapons have a quite different look compared to the original weapons in Counter-Strike, such as the Magnum Sniper Rifle which is now brown instead of green, and the Bullpup and the M4A1 which are now two-tone police black instead of their usual colors.

There are also alterations made to the damage and recoil of some weapons to provide better balance for the single-player game. Also, players can also carry up to three HE grenades instead of the usual one, and players can carry several primary weapons as well as secondary weapons.

There is also more variation to the faction models than in a regular Counter-Strike multiplayer game, as each model has different head variants available. Also, for each faction there are also environment appropriate camouflage uniforms available.

Variation to the models was also brought in the form of the hostage models. In missions which have objectives similar to the traditional hostage rescue multiplayer game mode, hostages have very different looks. These include scientists, women, schoolgirls and wounded SEAL Team 6 operatives.

Despite the inclusion of the old Terrorist factions, many of them have a completely different backstory/origin (for example the Arctic Avengers are Russian instead of Swedish); Their origin in this game is also indicated in the list below.

Ritual Entertainment employee Zak Belica was responsible for the new music and sound effects in Deleted Scenes. Each mission has several music tracks that will play in different parts of the map. In addition, all sound effects from the original Counter-Strike were enhanced to 16 bit sound quality.[12][13]

The background seen in the final version of Counter-Strike: Condition Zero was originally designed to be used in the version of the game designed by Ritual Entertainment. However, since it had already been used some uniqueness was brought to the menu look by changing the background color from the yellowish color to a blueish color. Also, the subtitle Deleted Scenes was added to the background.

The world map was also changed to a grayish theme, most likely to be more consistent with the style of menu used in the Tour of Duty single-player mode. It would seem that this new world map was done in a haste, as several missions are located in the wrong place on the map. Also due to the way the world map is designed, it will only function correctly when using resolutions with a 4:3 aspect ratio, such as 800x600 or 1280x960.[14]

Deleted Scenes contains some engine features that are unique to this game which affect the visual quality of the game and level design possibilities.

Deleted Scenes features some new mapping capabilities, including a scripted sequence system, which were introduced to facilitate the creation of the more complex missions featured in the game. While Ritual Entertainment had plans to release their custom editor for the game back when they were in charge of development,[15] this editor was never released.

The game includes a hidden skill level which can only be activated by typing skill 0 into the console. It is the most difficult of skill levels and the damage formula was supposed to resemble that of multiplayer games.[17]