View source
watch 02:23
Wiki Targeted (Games)
Do you like this video?
Play Sound

Counter-Strike Online 2 (CSO2 or CSOL2) is a spin-off MMOFPS in the Counter-Strike series. It is targeted towards the Asian gaming market, developed by South Korean company NEXON Corporation with oversight from license-holder Valve Corporation, and is using the Source engine.

Some of the models and maps are reused from Counter-Strike: Source and Half-Life 2.

The game is implemented with lots of game modes based upon some popular community mods, and Nexon makes them as its official modes with more features. 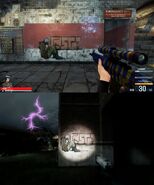 An example of the "Caste" graffiti near Black Mesa East in Half-Life 2. Reused in CSO2.

Screenshot including a VIP System
Community content is available under CC-BY-SA unless otherwise noted.