View source
watch 02:58
No Man's Sky Update - The Loop
Do you like this video?
Play Sound
Overview
Transcript

This is the central headquarters and training facility for Counter-Terrorists as they work to eradicate hostile influences and eliminate the threat of terrorism.

Test skills using the weapons arsenal.
Receive instruction for the specialized tools utilized throughout the missions.

Much like the Hazard Course from Half-Life and Boot Camp from Half-Life: Opposing Force, the player is briefed in the many tasks and functions present in the game. This includes using Deleted Scenes-specific equipment (such as the fiber optic camera, the radio controlled bomb, the camera and the blowtorch), learning about dangerous hazards (such as fire, poisonous gas, and contaminated liquid), as well as basic movement controls like moving forward, climbing ladders, swimming, crouching, and duck jumping. It also uses other gameplay aspects of the Counter-Strike series, such as the use of flashbangs, smoke grenades, HE grenades, guns, sniper rifles, defusing C4/nuclear bombs, and rescuing hostages.

There are several weapons and equipments used in this training that are:

While at the fire ranges, walk toward the ammo supply to get more ammo, so ammunition is more than enough, except for the M3 Shotgun.

The U.S Navy SEAL operatives use Colt M4A1 Carbine rifles, except at the bomb defusing scenario where one of them uses a K&M Sub-Machine Gun instead.

The player in the training camp

Poster of "Most Wanted Terrorists" 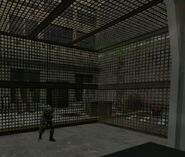 Kevlar before the Hazard course.

Counter-Strike carpet in the main hall

Counter-Strike carpet in the main hall

Jump when colliding with this pipe, facing this direction.

Return to the back way, and this hole will open.

Closeup of the spinning card which read "Ritual", a nod of creator of CZ and DS.