View source
watch 04:03
Wiki Targeted (Games)
Do you like this video?
Play Sound

“ Introducing Danger Zone — a fast-paced battle royale game mode built on CS:GO's tactical gameplay where players use their wits, skill, and resources to fight to the finish.”
―Official description

Danger Zone is a battle royale mode where players scavenge for equipment and engage in combat with each other in a shrinking battle arena, and the last surviving player (or player team) wins. The mode has maximum 18 players per game, either in Solo or in Duos.

Danger Zone is set on large open maps exclusive to the mode. The map is divided up into hexagons. At the start of a game, players need to choose an area of the map from which the player will spawn into. Once the game starts, players will be rappelled into their preferred spawn area. Players start equipped with nothing except their Fists as a weapon, one Medi-Shot, a Tablet to see the map and purchase items, as well as one equipment of the player's choice.

After the game starts, players will need to gather equipment and fight to the last man. The safe space on the map gradually shrinks, forcing players closer together and making combat more frequent.

Danger Zone does not feature conventional respawning. Players can only respawn when they playing in Duos, while his teammate is alive.

Danger Zone does not feature conventional item purchase. Additional weapons and equipment can be collected from randomized spawns around the map, or purchased with Cash.

Scattered around the map are supply boxes, containing weapons and equipment that can be collected once they're broken. Supply boxes with secondary Weapons, Grenades, or Medi-Shots can be broke open with fists or other weapons. Supply boxes with primary weapons require a weapon of some kind (Melee weapon, Gun, or Grenade) to be opened.

In addition to supply boxes, Cash can be obtained to purchase additional equipment. Bundle of Cash can be found around the map, each providing $50 when picked up. A $100 exploration award is also given if the player travels to another hexagon zone and staying there for a short period of time. A $700 bonus can be obtained by surviving expansions of the Danger Zone.

The Tablet is used to purchase equipment with cash. Players are provided a menu of items to purchase with their money, and upon purchase, a drone will deliver the purchased item to the tablet that ordered the item.

Locked gates can also be found around the map. These requiring a fee of money to be opened, additionally they can be blast open using an explosive.

Locked Safes containing money can also be found. They come with explosives wrapped around them, and arming these explosives will destroy the safe, allowing the player to collect the money inside.

In the late game, large crates will be dropped from the sky containing better weapons.

In the July 22, 2019 update a skill group system was introduced to Danger Zone. Unlike Wingman & Competitive matchmaking, players from all skill groups are queued together (rather than attempting to put players from specific skill groups in the same match).

Danger Zone features new weapons, equipment, and items. These include:

At the beginning of a game, the player gets to select a deployment perk to drop with. This includes:

Supply Crates spawn around the map. These are identifiable by a color, letter and number which tells the player what is inside them.

Only one map is available for matchmaking at one time. 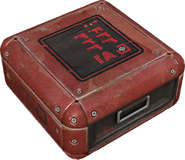 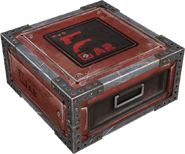 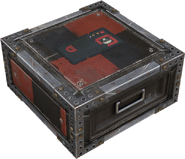