View source
watch 02:58
No Man's Sky Update - The Loop
Do you like this video?
Play Sound
Overview
Transcript
Walkthrough

The safety of this VIP is vital. His tour of a new Tokyo development will facilitate revitalization of this region. Hostile forces have threatened to assassinate him..

The player must escort a Japanese official who is inspecting a troubled city in Japan. Predictably, his visit incurs the wrath of some local Terrorists, who begin an attack on the city. The player is ordered to cover the official's escape, then go back on the offensive to eliminate the Terrorists. At the end, the Terrorist leader takes a schoolgirl hostage, forcing the player to shoot carefully and quickly eliminate him before he attempts to escape.

There are several weapons and equipment available for the player:

The additional weapons are hardly discovered in this mission. The weapons are:

There are rarely found ammunition in this mission. The ammunition are:

The operative who briefs the player.

An operative guarding the courtyard. 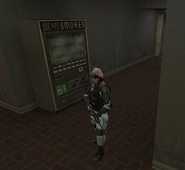 Tanaka guarding an alley after the Yakuza's first attempt to assassinate Mr. Yoshida.

A captain guarding the shop where Mr. Yoshida is hiding.