The Heist Mode is a cut game mode from Counter-Strike: Global Offensive.

A reference to the game mode can be found in func_bomb_target brush entity from CS GO SDK, where the bush property description says "This is a Bomb Target designed for the Heist game mode."

Placing the brush entity on the map's wall allows the player to "plant" the bomb on the wall.

In the May 31, 2016 update, Convars that reference "slow money" were added, and are possibly related to the mode:

In the November 28, 2016 update, a new untextured terrorist model named tm_heavy_riot was added to game files. It is possible that it is related to the game mode.

In the December 6, 2018 update, Unused "surrender" animation sequence were added to game files.Animation can be found only Danger Zone player models as know as "Jump suit". 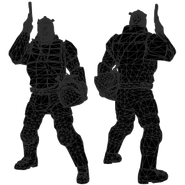 tm_heavy_riot, believed to be a Heavy Professional