Start a Wiki
watch 02:47
The Loop (Games)
Do you like this video?
Matchmaking is feature available in Counter-Strike: Global Offensive added as part of the October 25, 2012 update.

Searching for a selected game mode is available from Main menu in "Find a Game" or by creating Lobby via "Play with Friends" menu item.

Currently in beta, Prime Account Matchmaking was added as part of the April 21, 2016 update.[1] Players can opt-in to test the Prime account matchmaking by clicking on the More Info button located above the user's profile. Starting with the June 15, 2016 update, a profile rank of Lieutenant Rank 21 or above is also needed to participate. To complete the process, a valid phone number must be entered to "upgrade" the player's account to "Prime" status. Users with Prime accounts will be matched accordingly with other Prime account users. As part of the Prime account service, only a single account can be registered to a phone number, meaning the player cannot upgrade additional account to Prime status without having a separate phone number or reaching Lieutenant Rank 21.

In the November 13, 2017 update, Trust Factor was implemented for a better matchmaking experience.

Trust Factor is calculated by a number of factors, which include but are not limited to: hours spent playing CS:GO and other games, the age of one's Steam account, the frequency with which one is reported for cheating and whether one is elligible for Prime etc.[2]. The exact algorithm is not divulged by Valve.

Trust Factor is always enabled, even when an option to queue exclusively for Prime users is picked. The system uses the lowest value of TF in a given lobby and then matches with an enemy team around this player's TF.

Used in the following game modes:

Starting with the October 25, 2012 update, skill groups were introduced to help the player understand how the competitive matchmaking works. When entering a selected game mode, the matchmaking system will try to place the player with other players around the same skill level.

Players new to the matchmaking mode will not have a skill group. To keep the game balanced for novice and experienced players, joining a competitive / wingman mode without a rank will place the player with others with no skill group or a low level skill group. Additionally, players without a skill group are limited to two competitive matches that result in wins or draws per day until they are placed in a skill group by winning 10 matches to get a rank (or drawing a match after the 9th win).

Used in the following game modes:

Unlike Glicko skill rating system, the player can see how many matches they must win to rank up. Players gets one pip per win match and they do not lose pips until they reach rank 5.

If a player has abandoned a match, cheated, or otherwise has committed poor sportsmanship, the player will receive a competitive matchmaking cooldown. When a player has a competitive matchmaking cooldown, the player cannot participate in any competitive matches for the duration of the cooldown. The player will be notified of any existing cooldowns by a yellow banner at the top of the main menu page stating the reason and the remaining length of the cooldown. The first cooldown will last for 30 minutes, the second is 2 hours, then 24 hours, and lastly 7 days. If a player haven’t received a cooldown for a week, their level will go down by a level each week, starting after any existing cooldowns have expired. For example, once a 24 hour cooldown is over, they would have to wait a week until the cooldown level (provided that they do not trigger another cooldown) goes from 24 hours back to 2 hours.[6]

Reasons for a cooldown

Most of the actions that can trigger a cooldown only count when they occur during competitive / wingman matchmaking games.

If the player fails to reconnect in time for any reason or the player clicks the abandon button in the main menu then the player is considered abandoned and receives a cooldown. Choosing to abandon or failing to connect to the server within the warmup period is also considered match abandoning.

Activities such as teamkilling, excessive team damage, or a player being repeatedly vote-kicked from matches in competitive matchmaking.

Use of 3rd party programs, scripts, or other hacking techniques in competitive or casual matchmaking

Excessive suiciding (e.g. jumping off a building from the map Vertigo) will result in a cooldown.

During a cooldown period, a player cannot play any matchmaking, but can still play any of the casual game modes, including community servers or locally-hosted servers running the competitive rule set.

Cooldown levels drop by 1 level after a week with no additional offenses. There is no known limit to how many levels a person can get.

It's possible to receive a 10 minute cooldown due to the servers disconnecting players and it then rejecting their reconnection attempts or because an update was released in the middle of your matchmaking game.

Notice shows when player abandons a Competitive or Wingman match. 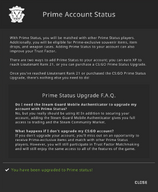 Notice shown when player has a Global Cooldown.
Add a photo to this gallery 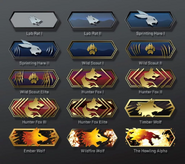 All skill groups from 'update' page

The Howling Alpha
Add a photo to this gallery

Pip
Add a photo to this gallery

Retrieved from "https://counterstrike.fandom.com/wiki/Matchmaking?oldid=153314"
Community content is available under CC-BY-SA unless otherwise noted.