Operation Bloodhound was announced as part of the May 26, 2015 update, introducing four new community created maps, while bringing back two past operation maps for the price of $5.99 USD/€5,49 EUR

The six chosen maps are available for free to all players on official servers.

Like the previous operation, the Operation Bloodhound Coin tracked the player's mission completions in addition to competitive highlights on operation and active duty maps during the operation.

Unlike the previous operation, Operation Vanguard, campaigns now include a full storyline to accompany each campaign. Additionally, missions no longer give the player drops, instead opting to give experience towards the player's profile rank. However, operation pass holders are eligible to receive an Operation Bloodhound exclusive drop when ranking up while eligible for a drop. Players can earn from 20,205 to 32,480 xp completing every mission, depending on if the player earns bonus xp.

Marksman
A counter-terrorist centric campaign in which the player is tasked by Sebastien Hennequet to train, locate and eliminate the Phoenix Connexion terrorist, Chase Turner.
Revolution
A terrorist centric campaign in which the player joins forces with Valeria Jenner and Chase Turner of the Phoenix Connexion to combat oppression. 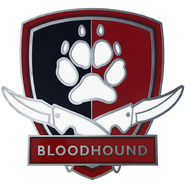 Operation logo in Perfect World version.
Add a photo to this gallery

Retrieved from "https://counterstrike.fandom.com/wiki/Operation_Bloodhound?oldid=144857"
Community content is available under CC-BY-SA unless otherwise noted.