. The operation ended on November 13, 2017. The update titled "The Best of Hydra", saw the controversial removal of Dust, Aztec, Vertigo, Militia and Shorttrain and the removal Operation Hydra maps Thrill, Black Gold and Lite. This update also added Wingman and Flying Scoutsman permanently.

Every week there will be a rotation between the three campaign game modes. These games are available to everyone to play, but in order to gain the ability to gain event experience, the player must be a badge holder. Each week will allow for one star to be gained. Based on the operation's scheduled length (18 weeks), the only way to earn the diamond coin is to get every weekly star on time (18 stars) as well as completing the campaign (7 stars) for a total of 25 stars. 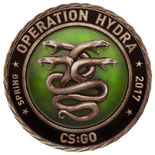 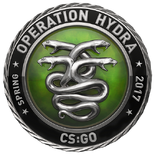 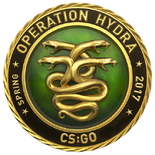 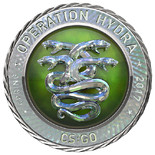 Operation Hydra has only one single campaign, making it the operation with the fewest campaigns included. Like its most recent predecessors, Operation Hydra includes a full storyline to accompany the campaign.

Unlike previous campaigns, there are no Challenge Award missions to give the player extra stars. Instead, a Guardian XP bar tracks the amount of Mission XP the player had gained through playing missions. The player gets one star for every 2,000 Guardian XP earned, up to a maximum of 7 stars. Only the first completion will grant the player Guardian XP.

Operation pass holders will receive an Operation weapon drop when gaining an Operation Star through Guardian XP, awarding a total of 7 weapon skins.

Hydra
The Hydra Campaign has 30 Guardian missions designed for cooperative play. Unlike other missions, these missions can be replayed at any time. Unlike the Gemini campaign from the last operation, this campaign features no Co-op Strike missions. The maps featured in the campaign are the six operation maps above, plus Mirage, Canals, Inferno, Train, and Rialto.

In the first week, all players start with a pool of 2,000 Event XP, the maximum they can reach when playing the Hydra Events. For each following week, the pool extends by 2,000 XP, up to a maximum of 36,000 XP many weeks later. Every 2,000 event XP rewards the player with a star, and the maximum amount of stars that can be gained through Hydra Events only is 18. 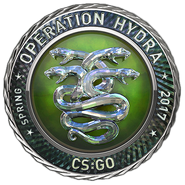 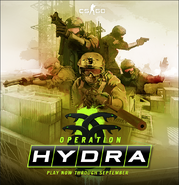 Before the reintroduction of Inferno, the CS:GO Official profile uploaded old versions for demo payback maps of all operation maps; all old versions of maps with text hinting at their possible inclusion in the next, yet unnamed operation. Subsequent updates removed all previous operations maps, Co-op Strike maps and Guardian maps[1], as well as adding the Heavy Professional[2] and thumbnails for the next operation's maps[3] to the game files.

Additionally, the operation was first officially teased during the "Hello CS" presentation in China, which also confirms the game's port to Source 2.[4]