Start a Wiki
watch 02:35
The Loop (Games)
Do you like this video?
Overwatch is a player-driven cheat jurisdiction process featured in Counter-Strike: Global Offensive. Working in tandem with Valve Anti-Cheat, Overwatch selects experienced and trusted players to become Investigators, who review demos of games with suspected cheaters, and come to a verdict on whether or not the suspected player had cheated. If the investigators conclude that the player is cheating or otherwise harming the gameplay for other players beyond a reasonable doubt, punishments such as game bans will be made towards the suspected player.  Players who have unlocked the Overwatch feature will not be able to use it if the player has their competitive rank hidden due to inactivity, they must get a rank to access it again.

When a player reports another player for possible cheating, the information is sent to an automated coordinator at Valve. The coordinator sees all the reports and chooses a game with a possible cheater and sends its demo to a group of Investigators for them to judge.

When the demo is sent out, Investigators will receive a notification on the main menu of the pending case. The Investigators can then download and review the demo through a limited version of the normal Spectator demo view. The view is restricted to the first-person view of the suspected player, dubbed "The Suspect", and automatically fast-forwards to the next round when the Suspect dies in the current round.

To protect player identities, all players, including "The Suspect", will have their names altered into generic names. Their avatars will be replaced with default T and CT icons. Chat and voice chat records are unavailable, and name tags for changed weapon names are not visible.

After watching 8 rounds of play, the Investigator decides whether the Suspect is guilty of the accused infraction. If the collective group of Investigators believe "The Suspect" to be guilty beyond a reasonable doubt, the suspect player will be banned from Valve servers (permanently for cheating or a month for griefing).

As of the June 10, 2015 update, players who participate in overwatch and submit enough reports also receive XP towards the player's profile rank. The player will be notified of the reward and receive the reward XP after completing a match on an official server.

When Investigators have reviewed the replay, the will be given a resolution checkbox with four different disruptions:

For each of the four disruptions, the Investigator can either conclude "Insufficient Evidence" or "Evident Beyond a Reasonable Doubt". 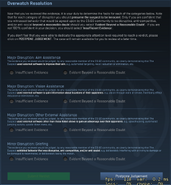 The Overwatch UI with pending case

Scaleform mission briefing.
Add a photo to this gallery

Overwatch Resolution window.
Add a photo to this gallery

Retrieved from "https://counterstrike.fandom.com/wiki/Overwatch?oldid=152721"
Community content is available under CC-BY-SA unless otherwise noted.