Rebels have taken control of an important oil pipeline and its main pumping station. Workers in this complex have been taken hostage as well.

The player must eliminate all of the terrorists and free the hostages. 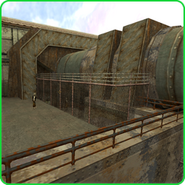 The Enemies at the building before destroyed by Hind

Hostages in an locked door