View source
watch 02:30
Dead Cells Final DLC - The Loop
Do you like this video?
Play Sound

“Three Ts defend a planted bomb against four CTs in this fast-paced game mode. Choose a loadout card at the beginning of each round and retake (or defend) the bomb site. The first to 8 rounds wins!”
―Official Description

In this mode there are only 3 players on the Terrorist team and 4 players on the Counter-Terrorist team. The first team to win 8 rounds wins the match. The round takes place with the bomb already planted at the start. Also at the beginning of the round, the players pick a loadout card which decides which weapons and equipment they have. Compared to the original maps, the Counter-Terrorist spawn at set random locations surrounding the bombsite. On the other hand, the Terrorist players are spawned on the bombsite and are temporarily blocked from moving out of the bombsite until the bomb has been planted by which then they are freely allowed to move to anywhere on the map.

The Counter Terrorist side radar shows which site has the bomb planted by a message underneath the radar along with an on-screen indicator. The players cannot spectate the enemy team when they die and friendly fire and money is both disabled. The bomb timer is 40 seconds.

During the 7 second freezetime, only the Terrorist team players can move within the temporary restricted area on the bombsite whereas the Counter-Terrorist players cannot move during the freeze time.

During the first two rounds of the match, all players loadout cards do not have kevlar and then subsequent rounds thereafter all players' loadout cards give them kevlar+helmet which have varying amounts between 60-80 armor points. For the first round, CTs only have one defuse kit, then in the second and third round they have 2 defuse kits. Then all subsequent rounds thereafter all CT's players have their own defuse kit. After the round has ended, any alive players weapons and equipment are not carried over to the next round.

The following maps are available after the December 3, 2020 update:

At the start of the round, the player gets dealt cards which they can choose from. These cards are random and a certain card can only be given to a specific amount of people. In addition, the bonus card will be awarded to the player who received an MVP in the previous round. This card will yield the player an additional grenade on one of their selectable cards. 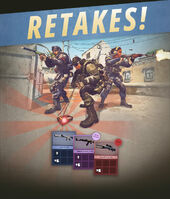 The anti-push barrier for Terrorists whilst the bomb is being planted.

A set of retake cards
Community content is available under CC-BY-SA unless otherwise noted.
Advertisement