On this sniper mission you must fight to stay alive after successfully assassinating a powerful gang leader.

Escape to the extraction point.

The mission begins after the player shoots down a gang leader with a Schmidt Scout. After successfully assassinating the gang leader, groups of Yakuza members start to appear and attempt to retaliate. The player must reach the getaway truck and escape. 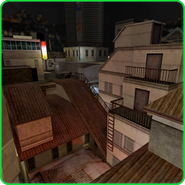