View source
watch 02:53
GTA: The Criminal Enterprises - The Loop
Do you like this video?
Play Sound
Overview
Transcript
Walkthrough

Rebels have taken over a remote missile complex in Russia. The threat of nuclear war looms. It is crucial that the facility is reclaimed and that the warhead is disarmed.

“By order of the Russian nuclear disarmament treaty, we have been commissioned to disarm and dismantle the former soviet nuclear missile silo site 6 of regiment 42. This should be a routine clean and disarm, but I want everyone to be on their toes. Apparently the support staff housed in site 6 have been out of contact for nearly 24 hours. Most likely a failed comm system, but I don't want to make any mistakes this time.”
―Commander

After being commissioned to disarm a former Soviet missile silo, the player and the other members of the Russian Spetsnaz discover that the facility has been taken over by two radical terrorist groups. One is trying to launch the nuke while the other is trying to steal it.

The mission begins with the player accompanying several Spetsnaz troops in a Russian APC while the officer gives a briefing: You're heading to disarm a missile silo. Suspiciously, it lost radio contact for the past 24 hours. The officer assumed that the comm system failed.

After attempting to open the doors using a security code, the doors do not open thus one of the soldiers, Yuri, uses a RC bomb to open the jammed entrance. It is later found out that the base is on emergency power. The player is sent to turn the power generators on. After exploring mysteriously empty areas, the player enters a room of executed scientists, at which your commander lets you know that two different terrorist factions are fighting one another, and the Spetsnaz operatives, for control of the missile silo.

During the initial firefight, the controls were destroyed and the missile is forced to launch in fifteen minutes. After discussion, it is found out that the missile can only be stopped by destroying the fuel lines with explosives. Yuri, the only operative with explosives, was shot by an opposing faction. The player is sent to receive the RC bombs from his body.

After placing the remote bomb on the fuel line, the commander announces he will stay behind to detonate the fuel line and to ensure no terrorists defuse the bombs. Barely escaping the exploding silo on a truck, your unit is met with an enemy Mil Mi-24 Hind. Using a M2 Browning mounted on the back of the truck, the Hind is defeated and the Spetsnaz soldiers prevail.

Five operatives (including the player) and a commander in the truck. They use:

Three operatives are seen during the elevator fight. One operative sends a report to the missile control room. They use:

Two operative are seen near the truck, and they fight the Terrorists who are attempting to stop them from escaping. They use:

The elevator operatives will spawn there if the player is quick enough to save them at the elevator area.

D3/AU-1 (discovered one time, no additional ammo. It is found near the door of the underground generator, between 2 doors. Heading left, you'll find it at the back of some boxes )

Krieg 552 (discovered two times, ammo found rarely. The first one is near the collapsed ceiling, the second is found after you leave the elevator where a Glock-18 is also located)

.40 Dual Elites (discovered one time, ammo found frequently. You must jump around the boxes above at the very start of the mission. You can find in the left above the door).

9×19mm Sidearm (discovered two times; in a laboratory before the firefight starts and in another lab after you leave the lift near a Krieg 552. Ammo is found frequently)

HE grenade (discovered three times, one grenade per encounter)

Flashbang (discovered one time, one grenade) 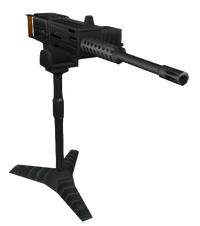 M2 Browning (discovered once, used to destroy the Hind. It is found at the back of the escape truck.)

The team being briefed.

The team in front of the facility.

Surviving team members after the combat near the elevator.

If the player has saved the other operatives near the elevator, they will appear at the truck.

The only surviving members of the team (with the player among them).

An M2, placed at the back of a Spetsnaz truck. 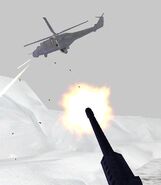 The player, using the M2 against a helicopter in Secret War.