Skins, also referred to as finishes, are a feature exclusive to Counter-Strike: Global Offensive, introduced in the Arms Deal update. They are weapons with different textures that can be equipped in-game. They are entirely cosmetic, holding no gameplay function.

To acquire a skin, one must either:

Many skins also have unique descriptions, and provide extra flavor text to their weapon descriptions. A number of them reference characters in CS:GO campaigns.[1]

*: Items of the class do not drop. However, as defined in the item schema, they use the Legendary and Ancient class drop sounds.

In the Steam Market and in-game inventory, generally skins have a white border around the preview icon, except for the following:

Stock weapon "skins" are also color coded with dark brown in the in-game inventory. Some stock weapons have market pages like the AK-47 for example, but they are not tradable or marketable so this color is rarely used for anything other than arbitrary sorting.

StatTrak™ is a weapon quality which tracks the number of kills performed by the owner of the weapon. StatTrak™ kills do not transfer between users when the item is traded. StatTrak™ kills can be converted to another StatTrak™ weapon of the same class through a StatTrak™ Swap Tool.

Weapons with the StatTrak™ quality can be acquired by opening weapon cases or fulfilling a trade up contract with skins which all have StatTrak™.

Skins in map or themed collections cannot be obtained in StatTrak™ quality, however, there was a bug at the beginning of Operation Riptide that allowed for StatTrak™ skins from map collections to be acquired. These skins were not tradable or marketable, and this was patched in an update later.

A float is chosen when a weapon skin is dropped, unboxed or received from a trade up contract. The float simulates a randomized condition on the skin. The rarity of the float is based on a bell curve for most weapons, with low float Factory New items and high float Battle-Scarred items being the rarest[2]. The closer it is to 0, the cleaner the skin is. The closer it is to 1, the more worn it appears.

Certain skins are float capped, where a float outside of the specific range cannot exist. For example, a P250 - Whiteout cannot have a float lower than 0.06, or a float higher than 0.80.

Different finish styles have different effects for lower weapon quality, some weapon finishes even have easter eggs built into the scratch pattern for higher floats.

A weapon float will not degrade over time and can never be changed.

The float hierarchy is the following, from best to worst:

Based on the finish style used, the same skin may have different looks due to variations with texture offset and displacement. This information is stored in a visible pattern index seed between 1 & 1000.[3]

There are many interesting seeds for various weapon finishes and some are more sought after than others. This drives the price of specific items with specific items up in value. A good example of this is the AK-47 - Case Hardened. Patterns with lots of blue are known as "blue gems" and are typically more expensive.

There are several finishes which a skin can adopt.

For a list of skin collections, see Skin Collections and for cases, see Weapon Cases

Excluding knife skins, weapon skins are organized by collections. The contents of a single case outside of the rare special items are considered to be part of a single collection. For non-case items, they are in collections based on a theme. This can be based on map, like the 2021 Vertigo Collection, or through an external theme such as the Gods and Monsters Collection. 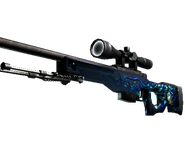 The collection the randomly dropped weapon skins are in are not dependent on what map the player was playing. For example, playing on Train will not guarantee the player a skin from the Train Collection.

Opening weapon cases will give the player one weapon from the weapon case's collection.