View source
watch 02:53
GTA: The Criminal Enterprises - The Loop
Do you like this video?
Play Sound
Overview
List

Stickers were introduced in Counter-Strike: Global Offensive with the February 5, 2014 update and are purely cosmetic addition to customize a player's weapon.

A maximum of 4 stickers can be applied to the majority of weapons, excluding the G3SG1 and the R8 Revolver, which can have a total of 5 stickers.

Stickers can be acquired by:

Stickers come in the following rarities:

Souvenir weapon skins have exclusive stickers which are unable to be received in any other form.

Unlike Skins, Stickers do not have a fixed exterior quality when received. Additionally, stickers will not degrade over time, but the appearance can be changed with the Scrape sticker option to create the illusion of wear and tear. Each time the option is clicked, the chosen sticker's appearance will degrade similar to the exterior quality of weapon skins.[1] Using the option on a single sticker too many times will result in the sticker being fully scraped off and removed from the weapon. Before the final scrape, an alert will popup to confirm removing the sticker. Doing so will destroy the sticker.

Example of a Holo sticker variant from Sticker Capsule 2

The above sticker's holographic effect

Example of a Foil sticker variant from the first Sticker Capsule 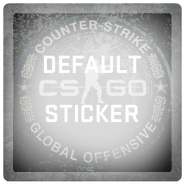 Sticker icon from "Get items" panel

Signature icon from "Get items" panel