The T-90 is a main battle tank that only appears in Counter-Strike: Condition Zero Deleted Scenes.

The T-90 is a gray tank equipped with a 125mm smooth-bore cannon and a 7.62mm coaxial machine gun. It was used by the Arctic Avengers in the mission Building Recon and by the Guerrilla Warfare during the mission Downed Pilot. The T-90 is literally invulnerable to all weapons because of its thick armor, except for the M72 LAW and other high explosive equipment.

The machine gun on the top of the tank is similar to the M2, possibly because of the 12.7mm DShK machine gun which has low rate of fire but can badly damage and kill the player.

In some custom maps, the T-90 or the M1 Abrams can be found. Some are even equipped with an operational machine gun. Killing anyone with that mounted HMG will cause the game to say the player obtained a kill with a tank, since it uses the func_tank entity.

It was by the Arctic Avengers to pin down/kill a group of British SAS operatives. The player later destroys it with a M72 LAW.

It was briefly used by the Guerrilla Warfare members. Instead of being used as a weapon, it was displayed as an easter egg. The T-90 will not attack the player but the hostiles next to it will, it will fire at the wall once you clear the area. You can closely inspect the tank through a fence this time. 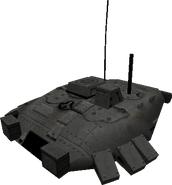 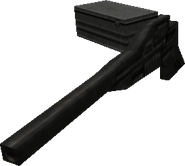 Add a photo to this gallery

Retrieved from "https://counterstrike.fandom.com/wiki/T-90?oldid=153592"
Community content is available under CC-BY-SA unless otherwise noted.