A homicidal cult is stockpiling supplies of a deadly nerve gas with plans to release it into a crowded area. Defecting cult members have tipped off the local authorities but are now being held as traitors by cult members.

Liberate all of the former cult members.
Identify all of the VX gas locations for Hazmat cleanup.

Truth in Chaos is an extra mission in Counter-Strike: Condition Zero Deleted Scenes.

The player must liberate all of the former cult members and identify all of the VX gas locations for Hazmat cleanup. 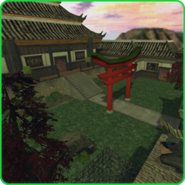 The statue and the door.

Oh, you shouldn't have done that!

AND NOW YOU GONNA DIE!

Community content is available under CC-BY-SA unless otherwise noted.