watch 03:19
Wiki Targeted (Games)
Do you like this video?
Play Sound

There are ten types of votes that can be called:

F1
Votes "Yes" on the current vote or chooses a map in a level vote.

F2
Votes "No" on the current vote or chooses a map in a level vote.

Unused "Yes" and "No" icons starting with name "vote" suggesting it, found in game files[1]. 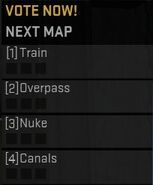 Vote to next map

Vote to next map/mode during War Games.
Add a photo to this gallery

"Vote to Next map" icon

"Not Ready For Match" icon

Unused "NO" icon
Add a photo to this gallery

Retrieved from "https://counterstrike.fandom.com/wiki/Voting?oldid=141552"
Community content is available under CC-BY-SA unless otherwise noted.